OpenCV Baby steps 6: From VM to metal, OpenCV 3.4.2 on RaspberryPi

Last weekend a fellow PiWars competitor (Vishal) pinged me and said my instructions for installing OpenCV on RaspberryPi were not working. OpenCV was getting installed but Python wouldn't load it, with missing dependency errors. My entire OpenCV series is for the sole purposes of a gentle introduction to OpenCV including how to set it up. If it wasn't working, we had a major problem. It was time to go digging...

I downloaded the latest Raspbian Stretch and flashed it on a 16Gb SD Card. Popped it in, booted up, let the new Raspbian update itself and installed OpenCV using pip3. Tried to load OpenCV to check it's version and sure enough it went splat! Same error as Vishal was getting.

UPDATE: February 2019. I tried this post and found the latest iteration of OpenCV was still not up to mark. Then I was pointed to this article https://blog.piwheels.org/new-opencv-builds/ by Ben Nutall is now all you need. 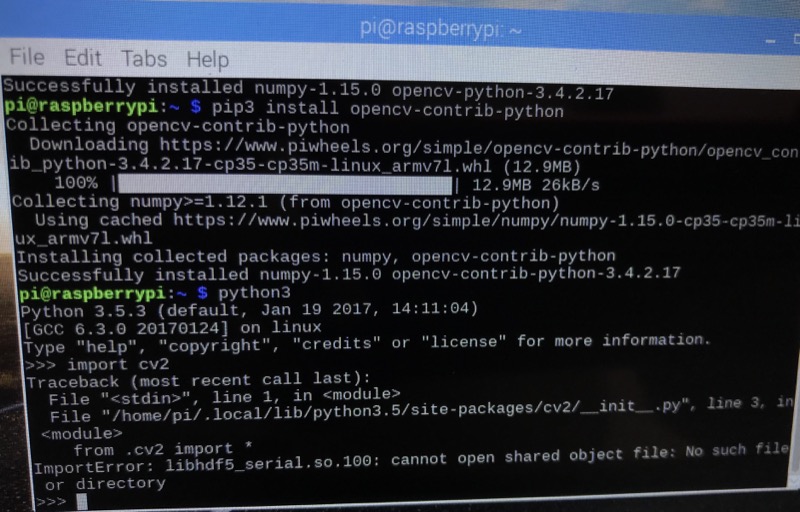 I said, oh well, only a few missing dependencies lets install them. After 10 minutes of error->install->error->install loop I hit an error that couldn't easily track back to a dependency library. Sent a few frantic tweets to Ben Nuttall but he was away so couldn't respond immediately. So I went digging and found this post that looked a bit dated but still applied to Python 3.

Gingerly I tried to install all the dependencies listed. After a couple of hiccups I finally managed to get the installation going. If you want to avoid the hiccups here is the cleaned up dependency list:

As you can see it is a really long list and it takes a good 30 minutes to install it (depends on your internet speed upto a certain extent).

Once the installation finished I tried to get the OpenCV version from the Python shell and yay!

That was installing OpenCV. However I still had to get my code running on the RaspberryPi. Turns out there were issues with that too. OpenCV does not compile any GUI toolkit by default on ARM, so imshow doesn't work. So all the work I had done to create windows and sliders etc. was not going to work. Turns out the matplotlib library however does work for ARM so it works swell on RaspberryPi. So I had to do a quick tweak on the load_image.py to get it working on the RaspberryPi. Instead of using cv2.imshow I did plt.imshow(img). This was ofcourse thanks to a StackOverflow post here.

Here is the updated code for load_image.py.

I am going to redo all the samples with the RaspberryPi in mind going forward and port the existing ones and copy them to the /pi subfolder.

While some people prefer compiling their Graphics library all they way down to the OS, if you are among those who don't (I don't), you'll need to discover the tools that will help you work with existing binaries and distributions. It's all part of a learning curve.

I had a nice discussion with Dave Jones and Ben Nuttall on twitter and learnt some more about how to discover dependencies. I'll try them out and report back if there are any differences from the list above. But for now, if you are in a hurry to test out OpenCV for PiWars, you need the above dependencies.

Also remember, if you are going to run your Pi Headless then there are separate python packages you can use

As per Dave the headless doesn't need the QT dependencies only.