Many apologies for the delayed update, I have been failing at doing detailed blog posts rather badly, but here we are. It has been more than a month now and we have made quite a bit of progress from last time, but nothing is readily visible because the bot still doesn't move on the ground.

In the last month (and a bit) we have managed the following :

I tried to get the adjustable ground clearance system working first because I wanted to know if that idea actually is workable with the hardware and chassis design I had. Turns out it works like a champ.

Here is a quick action peek of the first attempt. Since then, I have updated the attachment a bit to better utilise the circular path of the the levers.

As you can see, two beefy servos push down on a platform raising the chassis and in effect anything that's tied to it. However, 'ground clearance' doesn't really change because to start with we don't have anything that's below the lowest point in the bot that's currently the motors. As you will see later this changes when I start mounting various robot bits.

The up and down motion is controlled by a 4Tronix Piconzero. A Piconzero is an excellent little board that uses an ATMega microcontroller to add on to a Pi's capabilities. It supports 6 GVS outputs which means we can control upto 6 servos with it. It can also control two brushed DC Motors. Best part is, you power the motors via the 5V Micro USB connector. This separates out power to Pi and Power to Servos. It has another power port that you can use to power the DC Motors upto 12V if you want. But I believe you can't use both at the same time because you have to set a Jumper on the board to select 12V or 5V supply inputs. My Servos were 6V servos, so I am slightly undervolting them at 5V, but they pack enough punch even at that.

Right now I have a simple but of code that moves the servo arm up and down resulting in the lever pushing down/up on the platform.

The above code looks like a lot, but most of it is for handling keyboard entry. This is adapted from 4Tronix samples, viz. servoTest.py.

The main loop simply waits for Up/Down arrow keys or w/z keys to move the lever up or down by rotating the servo 5 degrees at a time. In the final code I may choose a finer degree of control by moving it in even smaller units of rotation. It also centers the servos when you press spacebar.

Once the ground clearance was sorted, next step was getting the steering working. Last year we had done front Ackerman steering. This year we wanted to be a little more adventurous and try Ackerman steering both at the front and back. Also unlike last year, this year our motors were on a suspension mechanism that varied in height with respect to the steering motor. So the links had to move in multiple directions as things moved around.

To get it work first thing we had to make sure was ensure the suspension stalk was rigid and did not pivot on the screws attaching it to the motor mount. So we had to drill additional holes and redo the bracket that attached the stalk to the mount. It ended up looking like this 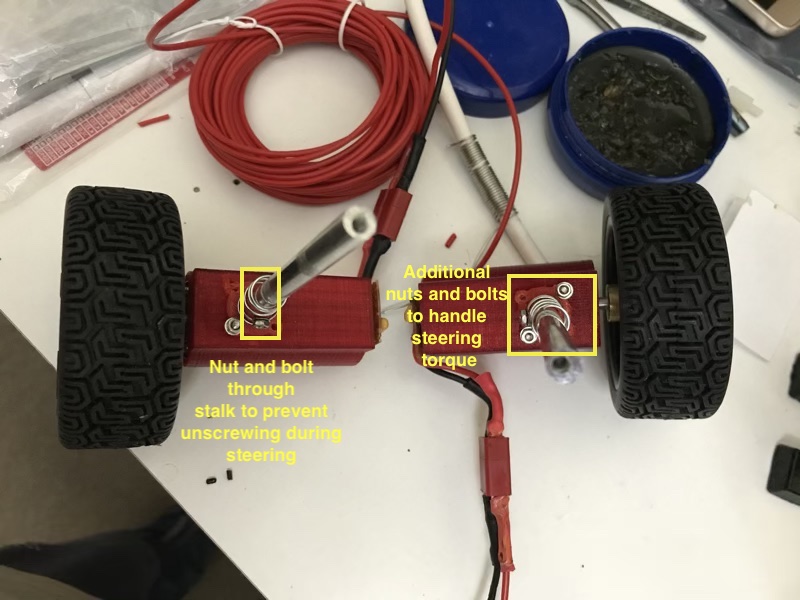 The links to attach to the steering motors were as follows: 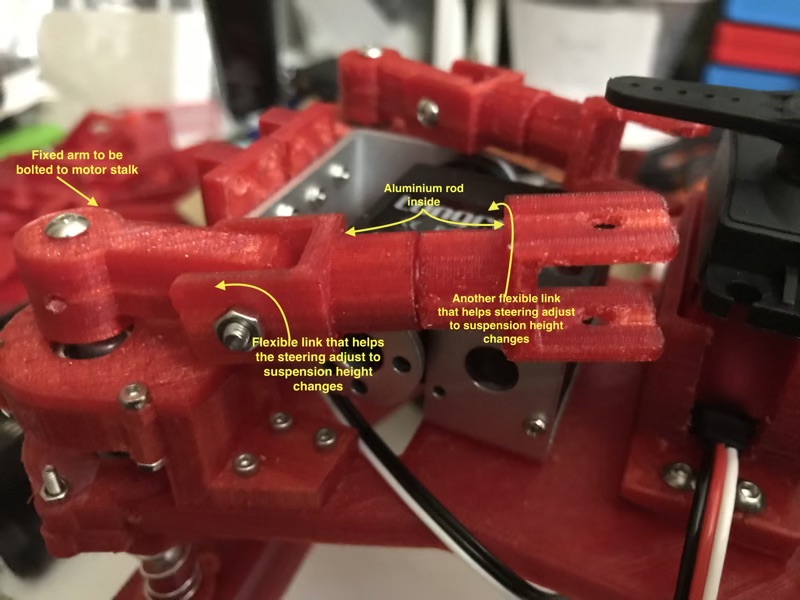 Here is a top view of all the links for front wheel steering. Similar mechanism is used for the rear wheels. I realised the mistake I made by bolting the links down, restricting twisting motion, as I was typing this post out. New idea as mentioned below is to replace them with springs in future.

The links might look dreamy but they kind of work as you can see in the video below. All I have to do it tie them to the servo horn so each small bit of motion is captured and results in wheels turning. 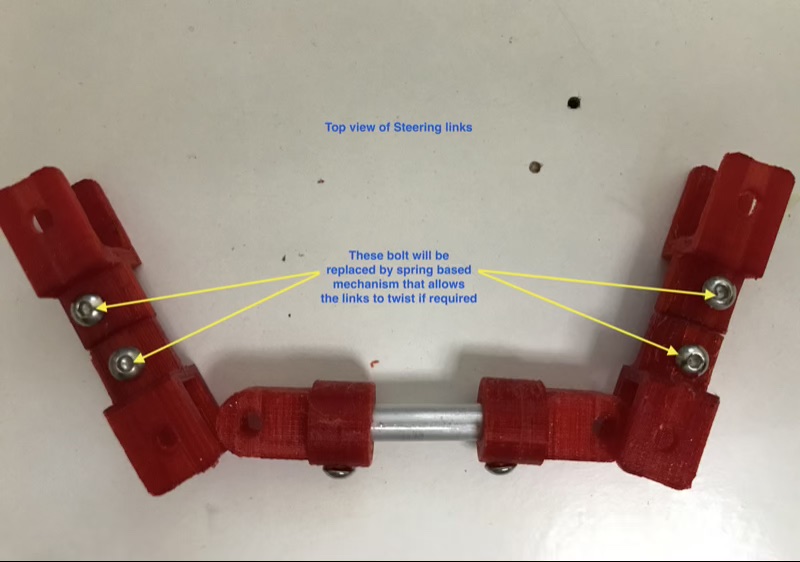 Here's a video showing how they may work on the bot:

With steering and suspension done, next was getting the wheels to move.

Last year we didn't have to think much about driving the bot because the software provided with Thunderborg was a very good template to start with and needed only minor tweaks to support the Controller. This year however, I went with a Dual H-Bridge controller from Cytron, which meant I had to figure out how to provide PWM signals to the Controller so that it could control the speed of the motors.

GPIOZero is a Ben Nuttall led community project that provides nice Python wrappers for all kinds of hardware that you can possibly drive via a Pi's GPIO pins.

GPIOZero has a nice wrapper called PhaseEnableMotor that you can initialise using the Pins to which your Motor Controller is connected.

Here are the Pins on my Motor controller and how they connect to the Controller Pi. 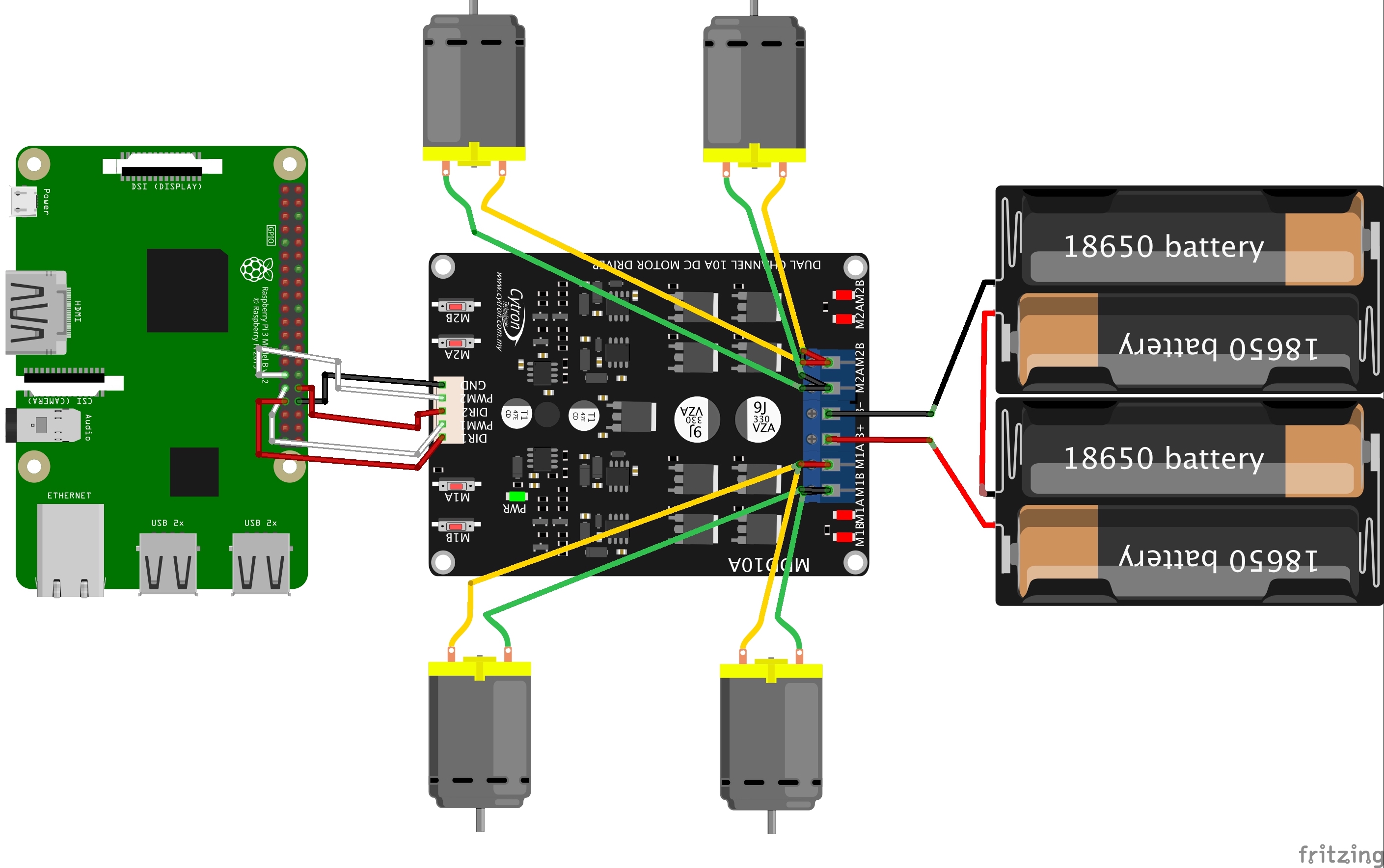 Essentially here's how the Pins are connected

I deliberately install the Python3 version because I do not want to use Python2 this year at all. Official installation instructions at GPIO Zero installation

To test forward and backward movement I wrote a simple loop that increases the PWM value from 0 to 1.

I am wrapping this up here because I want it to be a November update. In the next post I'll explain some of my challenges in fitting all the bot parts together. Till then tada and happy robotting!